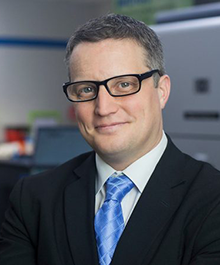 Chris has worked in the printing industry since 1996. His initial experience began in a small print shop in California, where he learned bindery skills. He soon relocated to Colorado, where he spent a decade working in the circulation, prepress, design, and layout departments of the newspaper industry.

Chris moved to Pittsburgh in 2008 and continued his career with Print Tech. He was initially hired in the prepress and large format departments. Chris went on  to work in nearly every other production department before becoming a Customer Service Representative. In 2012, he joined the operations team where he now oversees Corporate Accounts, IT, and Quality Control along with assisting in day-to-day operations.

Chris can be reached at ChrisH@printtechofwpa.com.